This sculpture was built in 1966 by 14 Cornell students in a course on the fundamentals of shell structures for engineering and architecture students taught by Professor Don Greenburg ‘55.

Shell structures such as domes, cylinders, and folded plates draw their strength through their inherent geometry enabling the construction of thin sculptural, “gravity-defying” shapes with minimal material.

These structures are often inspired by natural forms such as snails, leaves, and bones.

The students first built sixteen panels in the basement of Sibley Hall, which were bolted together onsite to create the formwork of the structure. Once secured, concrete was poured and troweled to form the thin concrete structure.

Many people predicted that the structure would collapse because it only had two supports and seemed as too thin to support is own weight. Despite skepticism, the hyperbolic paraboloid has exhibited amazing strength for over 70 years despite its 2 ¼” thickness.

More art in the Arboretum Created by two Cornell graduates, "Lightwave" is a sculptural bench located near the ponds in the F. R. Newman Arboretum. These abstract, ten-ton concrete sculptures were created in the 1960s by Cornell undergraduate architecture students. 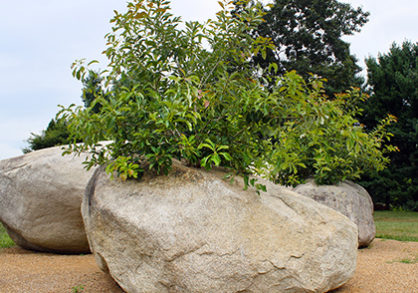 The Garden of Stones symbolize the tenacity of life, honoring those who died in the Holocaust and those who survived.