Recently, on a dazzling fall day, I had the good fortune to stand beneath the towering eastern white pines on Comstock Knoll. Looking upward, I watched the tall trees slowly swaying as a warm breeze stirred their shimmering, blue-green needles into swirling eddies against a cerulean sky. As it passed through the silken needles, the breeze made a hushed, swishing sound like the soothing sound of the ocean. I thought of the native peoples on whose ancestral land Cornell stands and their connection to the great trees overhead.

During November, we celebrate Native American Heritage Month and explore and honor the traditions, languages, and stories of Indigenous people in America. The eastern white pine, such as those on Comstock Knoll, has been a symbol of strength, protection, and longevity to the Haudenosaunee Confederacy for countless generations. The white pine is known as the Great Tree of Peace. The tree figures prominently in historical events leading to creation of the Great Law of Peace, which guides Haudenosaunee social and political culture.

The background story tells of ongoing conflict between the original five nations of the Haudenosaunee. A man from the Huron nation, named Dekanawidah, the Peacemaker, traveled from the north to speak to the leaders of each of the five nations and promoted forging a larger alliance that would be stronger than the individual nations and provide greater protection from outside forces.

The Great Law of Peace, Gayanesshagowa, is the result of an agreement between the original five nations: the Mohawk, the Oneida, the Onondaga, the Cayuga, and the Seneca who formed the Haudenosaunee Confederacy. When the leaders of the five nations of the confederacy agreed to form their alliance, they met beneath the sheltering branches of an eastern white pine tree (Pinus strobus), which became known as the Great Tree of Peace.

The Great Law of Peace guides the Haudenosaunee to strive for unity and to reach consensus on important decisions that benefit each nation as well as the entire Haudenosaunee Confederacy. Underscoring the guide is the philosophy that cultivating healthy minds in individuals contributes to the health and vitality of the larger community, which is essential to peace.

A veritable giant in the landscape, the eastern white pine is the tallest tree in the Northeastern U.S. and can reach heights of 150 feet or more, given the right conditions. Trunks can obtain hefty girths up to 4 feet in diameter in older trees. Tiers of horizontal branches extend from the straight trunks and bear silky, 3-to-5 inch-long bluish-green, filament-like needles that are attached in bundles of five needles. The five-clustered needles are representative of the five original Haudenosaunee nations.

Lifespans of at least 200 years have been reported in current times, and a few trees are known to be over 400 years! Old-growth white pine forests were abundant throughout the northeastern U.S. but were over-harvested during the 18th and 19th centuries for their valuable timber.

Standing beneath these trees reminded me of one of the fundamental tenants in the Haudenosaunee culture—that humans are in partnership with non-human species within a complex ecosystem, and through conscious collaboration and respect, the balance of the natural world can be sustained. This relationship is acknowledged in of the “Words Before All Else.” The address gives thanks to all living things and is recited at the beginning of community gatherings and events. Here you can listen to a portion of the “Words Before All Else” spoken in the native language of the Gayogo̱hó꞉nǫ’ (Cayuga) people of the Haudenosaunee Confederacy by Steve Henhawk, a Cayuga speaker and historian.

The words express gratitude to all beings, such as animals, birds, fish, lakes, rivers, mountains, sun, moon, and stars, corn, beans, and squash, berries, medicinal plants, and so forth. They serve to remind the Haudenosaunee—and all of us—of our inseparable connection to nature and each other.

Pam Shade is a horticulturist and educator at Cornell Botanic Gardens The white pine is a powerful cultural symbol of peace to the Haudenosaunee. 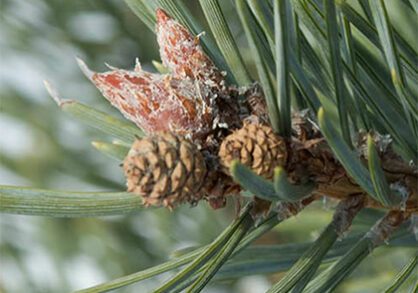 Words Before All Else

Learn more about the Gayogo̱hó꞉nǫ’ people by watching and listening to Steve Henhawk, a Cayuga speaker and historian. Sassafras is a North American tree steeped in Indigenous culture throughout its range within deciduous woodlands of the northeast and southeast United States.